The Chinese economy may be slowing but tourist numbers are still growing, prompting international hospitality giants to place bullish bets on the sector by opening new hotels and cruise routes.

Marriott International and Royal Caribbean Cruises are among companies looking to cater to a rapidly growing number of wealthy Chinese who are not only spending more at home but also flocking overseas, executives from the companies told CNBC.

To target fast-growing middle class Chinese who will not just need leisure but business accommodation, Marriott and China’s Eastern Crown Hotels signed an agreement recently to open 100 mid-scale Fairfield by Marriott hotels in mainland China by 2021. Another 40 hotels are slated to open later.

Intercultural aspects are also important: “U.S. hotel chains like Marriott should carefully analyze what Chinese travelers want. A common misconception is that Chinese travelers are interested in cheap, mid-range hotels.” said Pierre Gervois, CEO of China Elite Focus Magazines LLC, a publishing & consulting company based in New York. “The truth is that most of Chinese travelers are ready and willing to pay for five star premium hotels, and are tired of these stereotypes” added Pierre Gervois. “Marriot should focus more on attracting High Net Worth Chinese in their U.S. five star properties rather than investing in hastily strategized risky ventures in Mainland China ” he concluded.

As for outbound travel, Chinese tourists undertook more than 120 million trips overseas in 2015, according to the China National Tourism Administration. That number is expected to grow by 11 percent this year, Smith added.

To tap this growing market, Royal Caribbean Cruises will in April launch cruise ship Ovation of the Seas, with Tianjin as the home port.

Royal Caribbean is upbeat on the nascent cruise industry in China even though it is likely to capture just a fraction of the vacation traffic—typically 2 percent globally—said president and chief executive officer of Royal Caribbean Cruises, Adam Goldstein.

With over 100 million outbound departures a year, there are “not enough ships based in China right now … to even take 2 percent of the outbound travelers”.

There are just about one million cruise passengers in China now, he added. 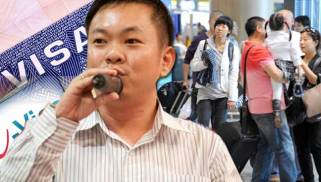 Malaysia announced on Tuesday it would introduce e-visas for travelers from China in an effort to boost tourism between the two countries.

Malaysia also waived the visa requirements for Chinese tourists who stay less than 15 days in the country from March 1 to December 31, 2016, Ministry of Tourism and Culture in Malaysia said at a press conference in Beijing.

The e-visa system will be carried out in three stages, beginning with an introduction for visitors from the Chinese mainland, and then to Chinese citizens who live outside the mainland. Finally, it will be extended to countries including India, Myanmar, Nepal and Sri Lanka.

Malaysia will allow visitors e-visa stays of up to 30 days, though some visitors will be approved for as many as 90 days, the traveling department said.

In an exclusive interview with the Dato’ Seri Mohamed Nazri Abdul Aziz, Minister of Tourism and Culture in Malaysia, he told the Global Times that the policy was designed to attract Chinese tourists amid competition from neighboring countries such as Japan and South Korea.

The Southern Daily reported on Wednesday that South Korea is expected to double the period of visa-free entry for Chinese transfer passengers to 10 years.

The ministry expects that number to hit at least 2 million this year, and possibly reach as high as 4 million.

Although the global economy has slowed, the tourism industry has continued to grow.

The Malaysian government believes that the tourism industry will stimulate trade and investment, as well as create job opportunities in the country.

Tourism contributed approximately $38.1 billion to Malaysia’s GDP in 2014, accounting for 14.9 percent of the total.

Foreign tourists spent about $17 billion in the country over the course of the year, according to a note the ministry sent to the Global Times on Tuesday. 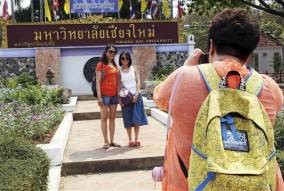 Chinese tourists paid 7,934,700 person-trips visits to Thailand in 2015 with an annual increase of 91.62% which has set a new record according to Tourism Authority of Thailand.

Thailand is rich and diverse in culture and tourism resources and has been one of the most favorite outbound destinations of Chinese tourists. China was the largest travel origin of Thailand and over 4.6 million Chinese tourists traveled to Thailand in 2014.

The top three tourist origin countries of Thailand were China, Malaysia, and Japan with about 8 million, 3 million people, and 1.4 million person-trips in 2015. Foreign tourists visiting Thailand are expected to reach 1 million people during the Chinese Spring Festival in early Feb 2016 and nearly half of them come from China, Singapore, Malaysia and other countries.

Foreign tourist visiting Thailand in 2015 reached 29.88 million person-trips in 2015 and the number is expected to reach 32 million people with an annual increase of 7% according to Ministry of Tourism Authority of Thailand.

Thai Airways will launch flights from Kunming to Chiang Mai and the flight will serve 36,000 airline seats per month in 2016 according to Tourism Authority of Thailand. Chinese tourists visiting Thailand are expected to reach 8.2 million person-trips in 2016.

“Although dairy exports were lower across the year, it has remained our top export earner. However, earnings from other export industries and markets have increased in significance, picking up the shortfall in dairy,” international statistics senior manager Jason Attewell said in a statement.

The growth in earnings from meat and travel was driven by key export markets, including China, the United States, and the European Union (EU). 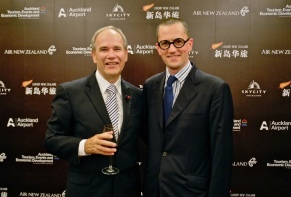 “We see clearly the result of the combined efforts of all New Zealand actors in travel & tourism over the last years”, said Pierre Gervois, CEO of China Elite Focus, a New York & Shanghai  based company specialized in promoting international destinations for Chinese tourists. “The Luxury New Zealand campaigned launched in 2011 at the initiative of Auckland Airport, and managed by China Elite Focus, changed the perception of New Zealand. The new generation of affluent Chinese investors come now to buy real estate and invest in New Zealand companies, as well as spending in luxury travel experiences.

New Zealand’s largest import expense in 2015 was electrical machinery and equipment from China.

“The rise in electrical machinery and equipment was mostly due to consumer electronics such as mobile phones,” Attewell said.

“In recent years, cars from Japan or the EU had been our top import.”

China has been on category C of Zimbabwe’s visa regime, which requires foreign nationals to apply for and obtain visas prior to their travel.

However, under the new visa regime, Chinese tourists travelling in groups and cleared by tour operators and travel agencies in China qualify to obtain visa on arrival, principal director for the Department of Immigration Clemence Masango told journalists at a press conference in Harare.

He said Chinese business people and other Chinese citizens travelling to Zimbabwe as individuals will still need to apply for visas prior to the travel.

Zimbabwe received 6,000 Chinese tourists in 2015, a miserable figure compared to 43,000 that visited neighboring Botswana, 65,000 for Zambia and 158,000 for South Africa, according to Zimbabwe Tourism Authority Chief Executive Karikoga Kaseke.

“The new visa regime on its own will not generate tourism for Zimbabwe. It should be supported by a lot of other activities. We need to be aggressive and market this destination so that Chinese tourists will increase in terms of arrivals in this country,” Kaseke said.

“We must be active in the Chinese market so that Zimbabwe is known,” he added.

Zimbabwe boasts some of the continent’s best tourism sites, including the Victoria Falls and the Great Zimbabwe ruins.

But the number of foreign tourists did not match its rich tourist resources. Apart from Western sanctions, the rigorous visa rules are blamed for deterring potential tourists.

Masango said the new visa regime was meant to facilitate free movement of people, and make Zimbabwe a more favourable and accessible destination.

Among countries whose nationals are now eligible to obtain visa on entry include Equatorial Guinea, Iran, Algeria, Turkey and Cuba.

This means that all SADC nationals no longer require visas to enter Zimbabwe.